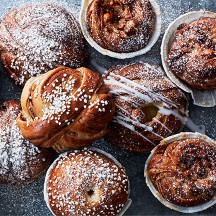 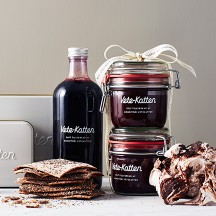 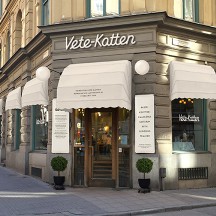 Behind Vete–Katten’s serving counter and coffee rooms is an area even larger than that reserved
for our guests. A labyrinth of corridors, rooms, stairwells and conduits criss-cross the old turn-of-the
century building. Here bakers, confectioners, chefs, cold-buffet specialists and serving personnel scurry
back and forth with pans, mixing bowls and trays, just as they’ve done for almost a century. The walls are
steeped in flour and spices, and the sweet aroma of freshly-baked bread finds its way up into the
surrounding stairwells. Someone once said that even if the house was razed to the ground,
the scent would still linger in its place as a sugary cloud of cardamom.

Yes, Vete–Katten is a Stockholm institution – written about, spoken about and above all visited,
by most Stockholmers, both well-known and unknown, from Great Garbo’s time to the current day.
We carry the torch for a long Swedish baking tradition of which we are proud and feel a great responsibility
to continue. For us this means that we make all our pastries and bread from scratch, using the best
ingredients we can find and with no additives whatsoever. We don’t take any shortcuts and let things take
the time they need. But a real patisserie isn’t just heavenly bread, pastries and coffee; equally important
is a warm atmosphere, welcoming ambience and knowledgeable staff, who always have a smile and
a few friendly words to spare. We hope you’ll feel right at home.

Vete–Katten was founded in 1928 by a particularly forthright lady, Ester Nordhammar.
In those days – women had only had the vote for a couple of years – very few companies were run
by women, and even fewer patisseries. Ester, who was 42, had considerable professional experience,
including working as a clerk, but had barely even set foot in a bakery. She had the idea to start a
simple patisserie, “decorated like a vicarage”, as someone said, offering pastries, bread and buns of the
highest quality. It is said that the name was spawned when Ester was asked what her bakery would be
called and answered: “Ja, det vete katten”, which in Swedish can mean both “the cat knows” and “the
wheat cat”. Somebody must have liked the spontaneity of this and the play on words, so the name stuck.
Another idea she had was to exclusively employ young women in the business (and she held by this, as not
a single man was employed at Vete–Katten until 1961, the year Ester died). She teamed up with a partner,
Anna Skog, who initially looked after production. After a few years Anna left and Ester continued to run
Vete–Katten by herself. And she did this, with a firm hand, until 1961 when she bequeathed the patisserie
to four of her employees. Two of them remained until 1979 when Vete–Katten was sold to Agneta and
Östen Brolin. They in turn sold the venerable institution in 2012 to master pastry chef Johan Sandelin,
who has worked in the company since 1997 and ensures the spirit of Vete–Katten lives on.

Despite his relative youth, master pastry chef Johan Sandelin is something of a classic confectioner.
He boasts a certain becoming roundness, is cheerful and jovial, and he loves his job. Originally trained as
a chef, Johan worked at a number of Stockholm restaurants until one day he saw a crocodile being carved
out of ice, and realised that that was something he wanted to do. The pastry chef’s work shares many
attributes with that of the artist, or perhaps more specifically, the sculptor. Johan started practising at a
French patisserie and was pastry chef there from 1994—97. When Vete–Katten advertised for a pastry
chef he applied, spurred on by the challenge of working at a bakery with such high demands and ambitions.
Ever since then he’s become part of the furniture at Kungsgatan 55. He became production manager
in 2009. And, since 2012, he’s also been proud part-owner of Vete–Katten. Johan has won many prizes
for his works of art. He was Pastry Chef of the Year in 2002, elected into the Swedish Chefs World Cup
team in 2010 and became captain of the Pastry Chef national team from 2013—2015. In 2014
he came in third in the Pastry Chef European Championships and won the Nordic Championships.
This year the team came in 7th in the Pastry Chef World Championships with exhibits including
a chocolate Viking ship and a Viking made out of – you guessed it – ice!

Vete–Katten has a large workforce and we are regularly looking for people in our
bakery, service, cold-meat and kitchen teams. We are always interested in meeting motivated,
talented people who thrive on a fast pace and very high standards of quality and service, so please
get in touch if this sounds like your kind of place. We are Sweden’s largest and oldest patisserie
and wear our traditions with pride. The atmosphere here is characterised by care,
joy and commitment, and we are keen to maintain this.

Hire a room at Vete–Katten for conferences, meetings or private gatherings. We have two
rooms available for hire, the larger “VIP” room which seats up to 12 people, and the slightly smaller
Piano room, for up to 8 people. Basic meeting equipment such as a flipchart and a small whiteboard
are available (in the VIP room) when you book. For questions and/or bookings,
email bestall@vetekatten.se or call 08—208405.

We want everyone to feel welcome at Vete–Katten and be able to enjoy the world-class
pastries and breads. This naturally includes everyone with allergies or intolerances towards gluten or
lactose, for example. We have a range of lactose-free and diabetes-friendly products, plus a number of
different types of gluten-free bread. If you are hypersensitive it is important to remember that we are
a bakery that handles large quantities of wheat, nuts, eggs and dairy products on a daily basis.

For open hours on our units, please check to the left.

This website uses cookies to improve your experience while you navigate through the website. Out of these, the cookies that are categorized as necessary are stored on your browser as they are essential for the working of basic functionalities of the website. We also use third-party cookies that help us analyze and understand how you use this website. These cookies will be stored in your browser only with your consent. You also have the option to opt-out of these cookies. But opting out of some of these cookies may affect your browsing experience.
Necessary Always Enabled
Necessary cookies are absolutely essential for the website to function properly. This category only includes cookies that ensures basic functionalities and security features of the website. These cookies do not store any personal information.
Non-necessary
Any cookies that may not be particularly necessary for the website to function and is used specifically to collect user personal data via analytics, ads, other embedded contents are termed as non-necessary cookies. It is mandatory to procure user consent prior to running these cookies on your website.
SAVE & ACCEPT